Home / About Us / History and Reach

A brief history of UP for Learning

A committee of four principals and youth voice advocates convened at the Vermont Principals Association in the winter of 2008 to find a means to elevate student voice in decision making and learning. This group conceptualized the basic Youth and Adults Transforming Schools Together model, and began a pilot year in 2008–09. Helen Beattie, a committee member, assumed the coordination and development of this effort. During the 2009–10 school year, it became clear that the scope and potential of this model, working intensely with a limited number of high schools, was inconsistent with the VPA’s mission to serve all K–12 Vermont schools. With the VPA’s blessing, YATST established itself as its own independent organization under the wing of the Vermont Rural Education Collaborative (VREC).

YATST began to significantly diversify its programming during the 2012–13 school year, and worked with a communications expert to create an organizational structure and new name that encompassed its broader scope and reach. Unleashing the Power of Partnership for Learning, or UP for Learning, was born.

Due to continued growth, UP for Learning pursued independent 501(c)(3) non-profit organizational status, which was granted in the spring of 2015. 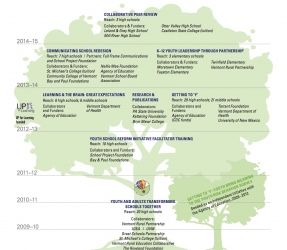 There is no greater power than a community discovering what it cares about.
-Margaret Wheatley

We strive to make our website accessible to all audiences, including those with disabilities. Read More

Learn More about UP 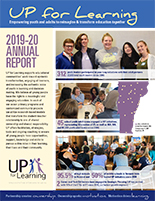 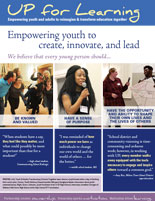